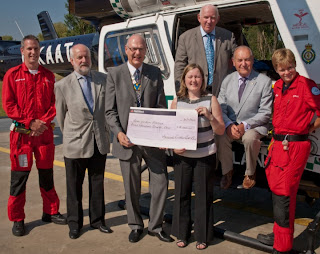 A charity concert held by Maidstone Riverside Rotary Club in its 21st anniversary year has raised £8,000 for Kent Air Ambulance and The Heart of Kent Hospice.

Maidstone Riverside has raised a grand total of more than £300,000 for local charities since it was founded in 1991.

In May, the club organised a charity concert featuring the London Welsh Male Voice Choir at All Saints Church.

Following the event, members visited the Air Ambulance base at Marden to present a cheque to the pilot, doctor and critical care paramedic.

President Colin Norgate said: "Maidstone Riverside Rotary Club is proud to be associated with Kent Air Ambulance and the generosity of the public in supporting our concert was evident in the amount of money we were able to donate to this service.”

“When we visited their headquarters to present the cheque for £4,000 we were highly impressed by the professionalism, dedication and enthusiasm of the whole team and the amazing job they do in caring for accident victims and helping to save lives".

Funds raised from the charity concert, which starred soloist and former Maidstone Girls Grammar School pupil Imogen Dyer, will be shared by the Air Ambulance and The Heart of Kent Hospice.

Each call-out of the helicopter costs about £2,500 so the sum raised will help fund two potentially life-saving mission.

The Heart of Kent Hospice specializes in providing expert palliative care and support to patients suffering from terminal illness.