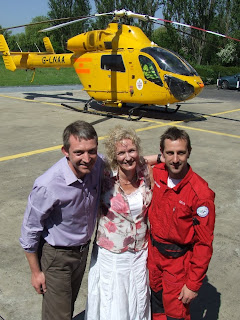 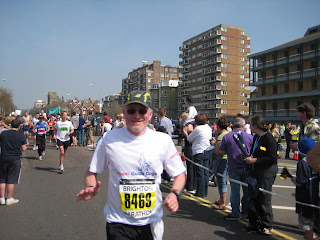 A motorist whose life was saved by Kent, Surrey & Sussex Air Ambulance has spurred a friend into running the Tonbridge Half Marathon to raise funds for the charity.

Chrissy Hawkins, 51, was on her way to work when she was involved in a head-on collision with an oncoming car on the A21 at Castle Hill.

Air Ambulance Clinical Manager Richard de Coverley was travelling in the opposite direction and was caught in the ensuing tailback. He was alerted to the accident on his radio and arrived at the scene within minutes.

The former Tunbridge Wells Paramedic Team Leader assessed both patients and found Chrissy had life-threatening injuries so called in his colleagues at the nearby helicopter base at Marden.

Chrissy was taken to the major trauma centre at King’s College Hospital in London with chest, abdominal, arterial  and limb injuries but has since made an almost full recovery.

Following the accident last September, her friend Duncan Lightfoot will be running next week’s half marathon in aid of the Air Ambulance which relies almost entirely on donations.

He said: “In the short time it took for the crew to reach Chrissy by road, Richard had conducted a thorough assessment and prepared her for the emergency interventions delivered by the helicopter’s doctor and paramedic.

“Chrissy had been rated with a near zero chance of survival from the injuries she received. Richard modestly said they just provided the transport to get her to the most appropriate major trauma centre but without the Air Ambulance crew that day, she would not have survived the journey.”

Chrissy, from Tonbridge, spent three months in hospital before she was finally allowed back home and is still off work and unable to drive.

She recently underwent further bowel surgery and is also receiving ultrasound treatment on a broken arm but is hoping to join Duncan in walking the last 100 metres of the run.

She said: “If Richard had not been in the traffic behind me that day and heard the report on his radio I would be dead, that really is how I see it. He saved my life.

“I just hope that in some small way, or preferably a large one, my experience and survival will help someone else.”

Duncan has so far raised £625 of his target £2,000 and can be sponsored at www.justgiving.com/DuncanrunningforChrissyHawkins.