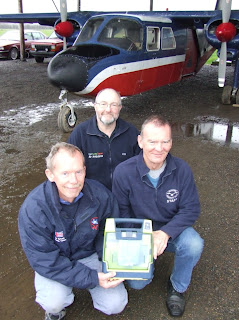 A Kent, Surrey & Sussex Air Ambulance nurse helped save the life of a parachutist who had a heart attack at 12,000ft.
Clinical Manager, Rob Wilkinson gave first aid and defibrillator training to Headcorn Airfield staff including parachute instructors Bernard Devine, Del Hopkins and Clem Quinn.
The trio recently put their training into practice for the first time when 74-year-old veteran parachutist Dave Coveney collapsed as he prepared to jump out of a plane.
They carried out CPR as the aircraft descended immediately and Chief Instructor Peter Sizer rushed out to meet them with a defibrillator when they landed.
They had to use the device four times to shock his heart into re-starting before an ambulance arrived and Dave was taken to hospital. The grandfather-of-one, from Kingswood, is now recovering at home.
Rob said: “Without the willingness of the staff at Headcorn Airfield to have this training and use it so rapidly and appropriately, this man would not be alive.
“Training is routinely provided to around 20 members of staff at the airfield and we’re really pleased it has paid off. It demonstrates another aspect of the Air Ambulance’s life-saving work.”
Rob has worked for the charity for 14 years and often provides first aid training in the community as part of his role.
Parachute instructor Clem said: “The defibrillator was absolutely brilliant and I’m totally converted to them. It’s like having an expert suddenly appear on the scene and it was very reassuring.”
In a separate incident earlier this year, a retired civil servant was out running when he suffered a cardiac arrest outside Fidelity Worldwide Investment in Hildenborough.
The offices are equipped with a number of defibrillators and staff used one to successfully resuscitate Dr Alan Heyes, OBE.
He was given emergency treatment at the scene by the Air Ambulance doctor and paramedic before being flown to hospital and has since made a good recovery.