Survivor reunited with pilot who helped save his life 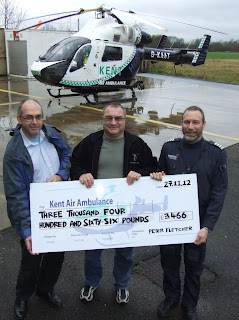 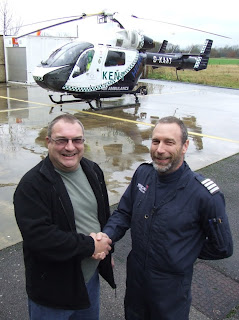 A cyclist critically injured in a road crash while training for a charity bike ride in aid of Kent, Surrey & Sussex Air Ambulance, has been reunited with the pilot who helped save his life.

Father-of-three Peter Fletcher, 51, suffered multiple injuries after a car collided with him on the A2 at Barham near Canterbury.

The Air Ambulance was called and he was given emergency treatment at the road-side by two doctors and a critical care paramedic.

Pilot, Captain Kevin Goddard, then flew Peter to a major trauma centre in London and he spent a total of six months in hospital before he was finally allowed home.

Last week (November 27th), Peter met Kevin for the first time since the collision as he kindly donated £3,466 to the life-saving charity.

He said: “Meeting Kevin and his colleagues gave me the opportunity to express my sincere thanks for saving my life.

“Since the accident I have been involved with raising money for the Air Ambulance which has added to the positives in my recovery. I am now committed to supporting the charity in the future.”

Peter, from River, was training for a 450-mile bike ride from Land’s End to Dover when the collision happened in March.

In June, his family and friends including brother-in-law Ian Sheppard honoured his pledge to raise funds for the Air Ambulance by cycling from the helicopter base at Marden to Fowlmead Country Park.

Peter has made a good recovery and is now walking, driving and back at work as an account manager for Invensys Operations Management in Crawley, West Sussex.