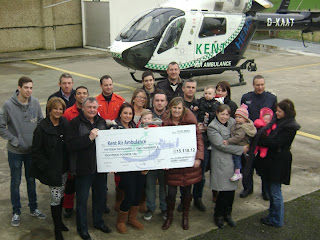 Family and friends of a father who died after a road accident have raised enough funds to help Kent, Surrey & Sussex Air Ambulance save six lives.

Garry Jarrett, 24, from Halstead, was flown to the Royal London Hospital following a collision in Kemsing, but sadly passed away after a week in intensive care.

The former Wilderness School pupil was a keen mountain biker and his close friend Danny Foskett held a sponsored bike ride at Bedgebury to raise funds for the charity helicopter.

Donations were made at his funeral and also by customers and suppliers of the family business, Automatic Machine Services.

In total, they raised a massive £15,118.12 for the emergency service which relies almost entirely on donations - the last four digits representing Garry’s birthday.

Each call-out of the helicopter costs about £2,500, so the sum raised will effectively help to potentially save six lives.

A group of 20 family and friends visited the Air Ambulance base at Marden on Saturday (January 12th) to present the cheque to the pilot, doctor and critical care paramedic.

Garry’s parents Chris and Roger, fiancée Sian and son Alfie would like to thank everyone for their kind donations.

Chris said: “We are overwhelmed by the amount raised and would like to thank the Air Ambulance for all their hard and dedicated work.”