Race ace thanks Air Ambulance for saving his life 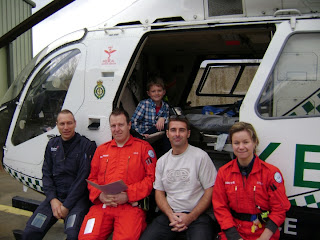 A British Superbike ace who survived a 130mph racing crash at Brands Hatch has been reunited with the Kent Air Ambulance crew who saved his life.

Former privateer champion John Crockford, 41, was competing in the final race of the National Superstock season when he collided with another rider on the Brabham Straight.

His wife Rachael and son Brody were among the crowd of 50,000 who watched in horror as he was catapulted from his 1,000cc machine on the first lap.

In total, he suffered 30 fractures to his leg, pelvis, back, neck, ribs and arm, and a ruptured diaphragm.

The Air Ambulance doctor and critical care paramedic anaesthetised him and performed a bilateral thoracostomy to reinflate his collapsed lungs – procedures usually performed in hospital.

John was then flown to the major trauma centre at the Royal London Hospital where an emergency blood transfusion was carried out.

He said: “When my wife first arrived at the hospital, the trauma consultant told her people didn’t normally survive these types of injuries.

“My leg break was a big one and I had five fractures in my pelvis which had split in half and broken into four bits.

“My stomach was pushed into my chest so it partially crushed my right lung and fully squashed my left lung, at the same time rupturing my diaphragm. It broke all 12 of my ribs.

“The medical team at the circuit thought I’d died. They didn’t know the full extent of the injuries but didn’t think there was any way I could have survived.”

Doctors at the Royal London gave John just a 20 per cent chance of survival and he spent 17 days in intensive care following the crash in October, 2011.

He was racing that day only because a friend had paid for the former Suzuki professional to relive his glory years of 2000-2005 when he regularly beat the likes of former World champion James Toseland.

The father-of-one, from Southampton, underwent operations to pin his femur and pelvis and was later transferred to his local hospital.

He was finally allowed home in a wheelchair at Christmas, 2011, but was back on his feet the following month.

Within six months he returned to work as a machinery technician and also got back on two wheels but vowed never to race again.

John recently visited the Air Ambulance base at Marden in Kent for the first time since his accident, to thank the crew for saving his life.