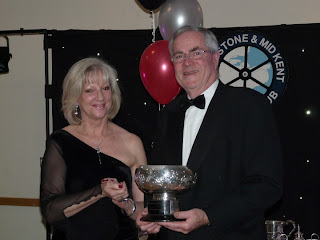 Air Ambulance Director of Communications, Jill Playle and Dick Slaughter, 1st place winner of the ‘Charing Rosebowl’ for the Special Stage Rally Driver/Navigator of the Year.

Motor sport enthusiasts stepped up a gear when they made a donation to the Kent, Surrey & Sussex Air Ambulance at their annual Awards Dinner Dance on Saturday evening.

The Maidstone & Mid Kent Motor Club is one of the oldest car clubs in and was formed in 1935. Over the years the club has counted a number of prominent local businessmen among its members including amateur and professional drivers.

A number of the club’s sporting events are named after its original members and this year they chose to support the life-saving local charity based at Marden.

Air Ambulance Director of Communications, Jill Playle presented awards to the winners of categories including car trials and tarmac and grass auto-tests.

She said: “The charity relies almost entirely on the generosity of the people, businesses, charitable organizations and societies, groups and clubs such as Maidstone & Mid Kent Motor Club.

“We are very grateful to them for supporting the charity and for their kind donation.”

Winners were presented with cups, trophies and medals for motor sport events which took place throughout the year. The Club Treasurer of the and Mid Kent Motor Club, said “The Club is very pleased to support this very worthy charity which operates to the benefit of the whole community”

The motor club welcomes new members as either spectators or competitors and meets every third Tuesday of the month at the Park Gate Inn in Hollingbourne.