It's a magic carpet ride for Air Ambulance 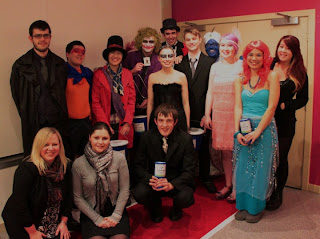 Students at the of rolled out the red carpet for a movie-themed magic show in aid of life-saving charity , Surrey & Sussex Air Ambulance.

Stage acts were based around films such as Black Swan, The Matrix, Alice in Wonderland, Johnny English and The Little Mermaid.

Magicians at the UKC Magic Society wowed the audiences at the Gulbenkian Theatre in last week (February 27th ).

In total, they raised £541 for the Air Ambulance from ticket sales, a raffle and a collection at the end of the show.

Air Ambulance Director of Communications Jill Playle said: “We’re very grateful for the support of the UKC Magic Society and such a generous donation.

“The show was very entertaining and it‘s lovely to see a group of young people so passionate about magic, supporting the charity.”

The UKC Magic Society was voted Kent Union’s Best New Society of the Year in 2011/12 and held a previous show for the Air Ambulance at their Canterbury campus last year.

President Simon Smith, a forensic science undergraduate, said: “Our audience this year has nearly tripled in size. We managed to raise more than four times the amount for the Air Ambulance compared with last year’s event. This is a tremendous achievement and we’re very proud of it.”