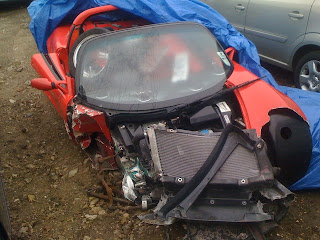 A motorist rescued by Kent Air Ambulance after a crash at Chartham is to be featured in award-winning Channel 4 documentary 24 Hours in A&E next week (Wednesday, April 24th).

Neil Chester, 39, was driving a friend’s Lotus sports car when he was involved in a head-on collision with another vehicle on .

He was trapped in the vehicle for half an hour and had to be cut free by Kent Fire and Rescue Service before being treated by land paramedics at SECAmb.

The Air Ambulance was called and arrived within 20 minutes from its base at Marden.

Neil, from Oxfordshire, was given emergency treatment at the road-side by the doctor and paramedic.

They carried out an advanced medical procedure usually performed only in hospital before taking him by land ambulance to King’s in .

Channel 4’s 24 Hours in A&E shows him arriving in the resuscitation area of the major trauma centre where the main concern is potential paralysis from injuries to his neck and back.

Charles, a registrar who treated Neil, says: “Psychology can be horrendous after a big smash.

“Quite often a big injury, a big car crash, even one where you don’t get injured, ranks as a life-changing event.”

The 20-part documentary series used more than 90 cameras to film around the clock at King’s, offering unprecedented access to one of ’s busiest accident and emergency departments.

The hospital is recognised internationally for its work in liver disease and transplantation, neurosciences, cardiac, haemato-oncology, stroke and major trauma.

24 Hours in A&E is on every Wednesday at 9pm and won a Royal Television Society Award last year.