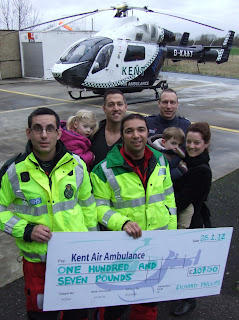 An award-winning celebrity TV chef from Kent will be among a selection of Britain’s top chefs going head-to-head in a culinary challenge for a new BBC1 series next week (April 17th).
Richard Phillips will be watched by millions as he faces his rival in a high-octane restaurant showdown for Chefs: Put Your Menu Where Your Mouth Is.
Every day, two renowned chefs buy food, prepare dishes and sell them to diners at some of the country’s most high quality dining establishments.
They will offer a three-course meal and can set their own prices with the aim of not just selling the most dishes but making the most profit for their chosen charity.
Richard, from Hollingbourne, kindly donated his proceeds of £107 to Kent, Surrey & Sussex Air Ambulance and recently visited the helicopter base to meet the pilot, doctor and paramedic.
He began his career at London’s famous Savoy Hotel and went on to work alongside the likes of the Roux Brothers at Le Gavroche before becoming Head Chef for Marco Pierre White.
By the age of 29, he owned Michelin-starred Thackeray’s at Tunbridge Wells which was voted Best Gourmet Restaurant in the 2009 Kent Restaurant Awards.
Richard also runs the Hengist at Aylesford, The Windmill at Hollingbourne and the Pearson’s Arms at Whitstable.
He has appeared on Ready Steady Cook, Saturday Kitchen and Daily Cooks Challenge, and can now be seen on Chefs: Put Your Menu Where Your Menu Is on Wednesday (April 17th) at 3.45pm.