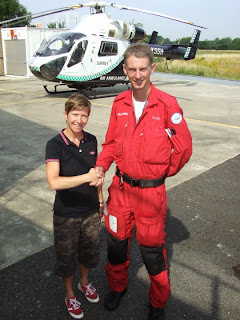 A cyclist airlifted to hospital after a road crash has been reunited with the Kent, Surrey & Sussex Air Ambulance paramedic who helped save her life.

Triathlete Susan Fry, 41, from Eastbourne, was taking part in the Mini Marshman triathlon in Lydd in Kent when she came off her bike.

She was planning to compete at the World Triathlon Championship qualifier in her age group in Nottingham the following weekend.

Police believe the mother-of-one may have been in collision with a passing vehicle and are appealing for witnesses following the incident in May.

Susan is now on the road to recovery and this week met Air Ambulance paramedic Alan Cowley for the first time since the collision.

She said: “I remember asking their names at the time but the trauma and blow to my head must have prevented me from remembering.

“I'd just like to add my heartfelt thanks to all the Air Ambulance team particularly to Dr Amy Hughes, paramedic Alan Cowley and the pilot Craig.

“Although I was aware I'd sustained serious injuries, I felt reassured that I was receiving the best possible care and I shall be forever grateful for their help.”

She was given treatment at the road-side by the doctor and paramedic before being flown to King’s College Hospital in London.

On Monday, the former personal trainer and sports massage therapist visited the helicopter base at Marden with her partner Liz Lumber and their three-year-old son Fin.

Liz said: “It was really reassuring to know that Sue was being taken to a specialist hospital to deal with her injuries. This can make all the difference to the outcome of her injuries.”

Depending on her recovery, Susan is planning to run the Beachy Head marathon in October to raise funds for the life-saving charity.