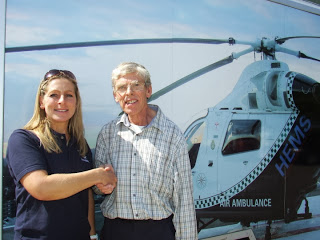 A paraglider who crashed while flying near Seaford has been reunited with the Kent, Surrey & Sussex Air Ambulance medics who helped save his life.

Retired electronics engineer Ian Daniels, 65, fell more than 50ft to the ground and suffered a broken shoulder and chest and internal injuries.

He said: “All I can remember is that I was flying at High and Over and had reached a height of about 800ft.

“Presumably I then made my way back to the ridge where I had taken off but after that I don’t remember anything. It’s possible I lost consciousness due to dehydration as it was very hot that day.”

A van driver and two other paragliders who witnessed the crash raised the alarm and paramedics from the South East Coast Ambulance Service (SECAmb) went to the scene.

Due to the severity of Ian’s injuries, they called in Kent, Surrey & Sussex Air Ambulance which arrived in just 20 minutes from its base at Marden – a journey that could have taken more than an hour by road.

Pilot Kevin Goddard landed in a field next to Ian and his colleagues Dr Malcolm Tunnicliffe and paramedic Sloane Philips carried out emergency treatment at the scene.

They gave him pain relief, sedated him and carried out chest surgery - advanced medical procedures usually performed only in hospital.

They then airlifted the grandfather-of-three to the Royal Sussex County Hospital at Brighton where scans confirmed he had five broken ribs and a damaged spleen.

Ian, from Hassocks, spent six days at the regional major trauma centre before he was finally allowed home.

He recently visited the Air Ambulance base to meet Malcolm and Sloane for the first time since his accident in July.

And he watched as the life-saving charity helicopter took off on another call, this time to a road traffic collision in St Leonards on Sea.

He said: “I feel very grateful to the Air Ambulance to still be alive. It’s a brilliant organisation and I’m surprised it doesn’t get any regular funding from the Government.

“There are a lot of volunteers who help raise the money and I would not have got the help I did without them.”

Sloane said: “It was great to see Ian again and we are absolutely thrilled with his recovery.”