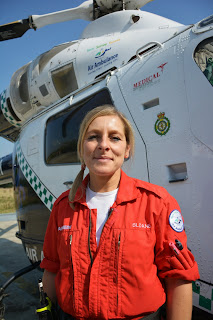 Sloane Phillips, 39, joins 400 inspirational women at the annual Lunch that celebrates achievement across all fields

Sloane Phillips, a Helicopter Emergency Medical Service (HEMS) paramedic from Hastings, East Sussex, has been handpicked in recognition of her personal contribution to society to join 400 women from all walks of life at the Women of the Year Lunch. This year’s event will take place on Monday 14 October 2013 at the InterContinental London Park Lane Hotel.

The Women of the Year Lunch and Awards ceremony honours women’s incredible personal achievements. It brings together more than 400 extraordinary women from all walks of life, all of whom have achieved something of significance. Each guest is regarded as a ‘Woman of the Year’ and represents not only herself, but the millions of extraordinary women who make a difference every day.

Sloane is attending in celebration of her work in support of two charities – The Royal National Lifeboat Institution (RNLI) and the Kent, Surrey & Sussex Air Ambulance Trust.

Sloane has volunteered for the RNLI for 18 years and last year became one of few women in the UK to qualify as an all-weather lifeboat coxswain. As a volunteer, Sloane steps in for the permanent coxswain when they are unavailable, taking charge of the all-weather lifeboat and being responsible for the safety of all the crew on board. Over the past 18 years Sloane has stayed committed to her duty of safeguarding and rescuing those in danger, helping to rescue children swept out to sea and towing stranded boats back to the safety of the harbour.

Sloane and her team regularly carry out life-saving medical procedures and interventions at the scene of an accident or emergency and qualifying to become a Coxswain and a HEMS paramedic involve rigorous assessments of knowledge and strength.

Sloane comments, “I feel hugely privileged and proud to work for the Air Ambulance and volunteer as a Coxswain for the RNLI. There is no better feeling than helping someone in trouble.”

She adds: “When I saw the invitation to the Women of the Year Lunch and Awards, I was so surprised, but I am absolutely delighted. I am immensely proud to not only represent women’s real achievements, but also the charities I work with. It is going to be exciting to get the chance to meet more inspirational women from all over the country.”

Baroness Helena Kennedy QC, President of Women of the Year, said: “The remarkable thing about this lunch is that it’s not just about celebrity or success. It’s about seeing the exceptional in unusual places, recognizing women not only for their drive, ambition and tenacity, but for seeing a need and finding a way to make a difference. For taking the hard knocks, surviving them, and sticking at it.

“These women are role models. Their courage is breath-taking and they reaffirm our faith in the human condition by showing us that wherever you are, people do good things for each other.”

At the Lunch, special awards will be presented to exceptional women who have each proved an inspiration to others through their courage, selflessness and dedication. The winners are selected by a judging panel made up of prominent female figures in media, business and the charity sector.

The winners will be announced on Monday 14 October 2013 and previous Women of the Year winners include:

Doreen Lawrence, campaigner for justice following the murder of her son Stephen in 1993

Katie Piper, who set up a charity to help burns survivors after being victim of a brutal acid attack