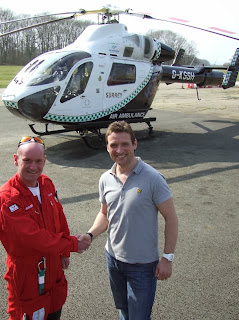 A Shepperton father who survived a near-fatal cycling accident is preparing for a charity bike ride next month in aid of the Surrey Air Ambulance medics who saved his life.

Andy Curran, 42, suffered multiple injuries after he crashed during a training ride and had to be given emergency treatment at the road-side by the doctor and paramedic.

He spent three months in hospital and even missed his wedding but has since made a good recovery following the accident two years ago.

Andy finally married his partner Charlotte last year and the couple now have a baby son called Alfie who was born just a day after the second anniversary of the crash.

He is now organising a run, swim or cycle which he hopes will become an annual fundraising event and will eventually raise £150,511 – the figures representing the date of his accident.

The first Curran Canter is to be held on October 13th when Andy is aiming to complete a 75-mile ride starting and finishing in Walton on Thames, taking in Box Hill and the Surrey Hills.

He said: “This will be a milestone ride as it will take me past the accident spot as a symbol of my recovery and determination not to let anything hold me back.

“The past two years have been an incredible journey although challenging at times with many hospital appointments and surgical procedures.

“My passion and drive has always been to get back on the bike and it’s now all about giving something back through something that I love so much and that’s my cycling.”

Andy, a business manager for British Airways, was out cycling on a training ride when his accident happened in Headley in May, 2011.

The air ambulance was called and Dr Anthony Hudson and critical care paramedic Stu Plumbley carried out emergency chest surgery at the scene to release air trapped in his lungs – an advanced medical procedure usually performed only in hospital.

Pilot, Captain Kevin Goddard then airlifted him to the Royal London Hospital major trauma centre where scans showed he had a total of 202 multiple fractures to his skull, leg ribs and spine.

Andy lost most of his right lung and spent three weeks in an induced coma and a total of three months in hospital before he was eventually allowed home.

He added: “Without the Air Ambulance, I would have died where I fell. It was the skill of the crew, the equipment they carry and the fact that they could get me to the right place for the right treatment that saved my life.

“This is a service that anyone could find themselves needing, anyone from a cyclist to a runner, a swimmer or even a dog walker.

“This year’s Curran Canter will be a tester event and is open to all members and friends of Viceroys Triathlon Club who have supported me on my journey.

“Next year, the aim will be to open the event up to the public and it will be a non-competitive ride. We endeavourer to be like Comic Relief in that every penny raised from a Curran Canter will go to the Air Ambulance.”

Andy has so far raised £580 of his target of £1,505 and can be sponsored at www.justgiving.com/currancanter