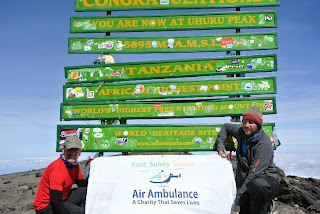 Photo, L-R: Scott and Brett pictured at the summit of Mount Kilimanjaro with an Air Ambulance banner

Brett, 35, had previously completed two marathons in two weeks as part of their fundraising but nothing could prepare him for trekking to the top of the world’s tallest freestanding mountain.

He said: “It was definitely one of the hardest challenges I've ever done and the feeling of getting to the summit at sunrise was out of this world.

“I almost succumbed to altitude sickness a couple of times but all the time my legs were moving I was determined to move them in the right direction – up!

“The sleep deprivation was difficult and when we set off at midnight to attempt the summit I was literally falling asleep while walking.

“Coupled with the lack of oxygen, every few metres was draining my body and I would lean on my walking poles for a few seconds of shut-eye.

“There's always that little voice in the back of your head reminding you why you are doing it and within our party of 18 people we each had a very personal story to tell and that is why I made it.”

Brett and Scott decided to raise funds for the Air Ambulance after a neighbour’s life was saved by the pilot, doctor and paramedic.

The 18-year-old was involved in a road traffic collision and was flown by the charity helicopter to a specialist major trauma centre in London.

She is now back home and undergoing rehabilitation and her survival inspired Brett and Scott to climb 19,341ft Mount Kilimanjaro earlier this month.

Scott, 43, said: “It was a fantastic achievement but very hard work. At times I was struggling for breath and my lungs were hurting on the way up but we both made it to the top.”

The pair have so far raised £9,080 from a number of a string of fundraising events including the Ashington Village Ball and by running the London and Brighton marathons.