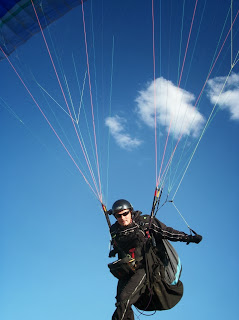 A paraglider is soon to embark on an epic non-stop 100km flight through the Himalayan mountains to raise funds for Kent, Surrey & Sussex Air Ambulance.

Father-of-two David Maidman, from Hawkenbury, will be jetting out to India on Friday (October 18th) ahead of his charity challenge.

The 49-year-old self-employed gardener will spend a few days preparing for the adventure before finally launching himself off the 8,848-metre-high peaks.

He will rely on thermals (bubbles of rising warm air) to keep him aloft but if they stop working he will be heading back down to earth.

David said: “The challenge is ambitious but achievable and should take about four to five hours to complete.

“It’s getting very exciting and it will be quite an accomplishment but I’ve been training for months and I’m now quietly confident.

“It's relatively safe if you don't get into the big mountains but if I get blown down, I may have to walk to get back to base and that’s where the adventure really begins.”

David, of Forest Way, has been inspired by Ed Stafford who was the first man to walk the length of the Amazon River which took him two-and-a-half years.

He qualified as a glider pilot four years ago after training at Mount Caburn near Lewes, East Sussex, and has previously flown in France, Spain and Morocco.

He added: “The Air Ambulance is very respected in my flying club because we often have to call upon their service when things go wrong.”

David has so far raised more than £1,300 for the Air Ambulance and the children's hospice Demelza House and can be sponsored at www.justgiving.com/david-maidman