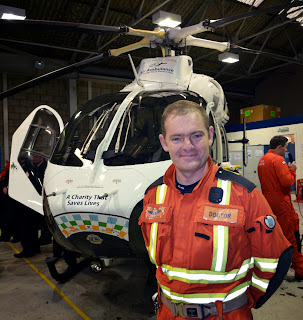 Up until recently, and unlike the rest of Europe, the service could only fly by daylight and so traditionally operated between 7am – 7pm with two specialised medical teams deploying in two helicopters from the Marden base in Kent and Redhill in Surrey, and in emergency response cars after dark. The teams attended about 1,500 missions and treated about 1,000 patients each year.

There has, however, long been a clear indication of patient need by night. The charity undertook its own prospective and retrospective audit of patient cases which identified that there were between 400 and 500 patients per year in the 3,500 square miles that is Kent, Surrey & Sussex who would benefit from night HEMS and also, most significantly, that about half of these cases were between the hours of 11pm and 5am.

It is not possible to attend so many patients dispersed across such a large area by car and so a centrally-located helicopter and medical team was clearly needed. Following a change in Civil Aviation Authority (CAA) regulations in 2012, the charity replaced one of its older MD902 helicopters with a night-capable MD902 which now operates from Redhill Aerodrome throughout the night.

Because of the region’s size, complexities, and the presence of two major and many other minor airports, the decision was made to fly with two pilots rather than a traditional single pilot operation, to ensure the safest and most reliable service for patients and crew alike.

Kent, Surrey & Sussex Air Ambulance Trust Chairman Anthony Monteuuis said: “This is a hugely expensive step and we have taken the greatest care to devise a service that is as robust and as safe as possible for everyone flying in the helicopter whether it’s the patients or crew.

“The people of Kent, Surrey and Sussex are better served from this moment forward than they have in the past.”

Kent, Surrey & Sussex Air Ambulance Chief Executive Adrian Bell said: “Our focus is on getting our highly-skilled teams with their time-critical interventions, to the patient as quickly and safely as possible not only to save life but also to improve the quality of survival.

“None of what we do would be possible without the support of the public. There are many patients alive and well today, living with their families and amongst their friends who would not be there without the public’s generous support and I would like to thank them on behalf of the charity, and all the patients we attend and treat, for their kindness and thoughtfulness.”