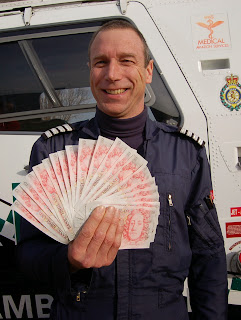 An Uckfield resident is splashing out on a holiday to Sri Lanka after winning £5,000 in Kent, Surrey & Sussex Air Ambulance’s Christmas Draw.

She said: “At first I’d forgotten that I’d bought some tickets but then realised I had. I’m delighted, it’s quite a sizeable amount and it will help cover the cost of Christmas which is fantastic.

“It’s been one of those years where everything has broken down and we’ve had to replace things so this will help to cover the cost of it. We’re also going away to Sri Lanka soon so it will also give us some spending money for that.”

A ticket holder in Chichester won the second prize of £1,000 while the third prize of £250 went to a winner in Chatham. There were five further runner-up prizes of £50 each.

Funds raised from this year’s Christmas Draw will potentially save 80 lives and the charity also has its own in-house lottery to generate income as it receives no National Lottery funding.

* If you would like to make a donation to the Air Ambulance, or join the lottery, please call 01622 833833 or go to www.kssairambulance.org.uk