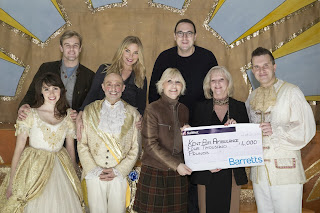 Photo: The cast of Jack and the Beanstalk

An all-star cast from Jack and the Beanstalk took time out of their busy schedule to present a cheque for £4,000 to Kent Air Ambulance at the Marlowe Theatre in Canterbury on Wednesday.

Barretts of Kent, one of the county’s leading motor dealerships, took over the theatre for a special one-night performance in December to raise funds for life-saving charity.

Colleagues and customers of the motor group filled the theatre to watch an all-star cast performing one of the most popular family pantomimes led by EastEnders actress Samantha Womack and children’s favourite Phil Gallagher.

Paul Barrett, Managing Director of the group, said: “It’s the first time we have held an event such as this and, in keeping with the spirit of Christmas, we wanted to be able to give something back. We decided to raise funds for three local charities and are delighted that we have been able to raise so much for them.”

In addition to the Air Ambulance, Pilgrims Hospices and Porchlight also received £4,000 each.

If you would like to make a donation to the Air Ambulance please call 01622 833833 or go to www.kssairambulance.org.uk