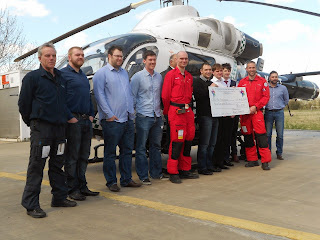 A group from the East Kent Masonic Province visited the Kent, Surrey & Sussex Air Ambulance’s base at Marden recently to present a cheque for £4,000 to the crew.

The masons who were from lodges throughout the county were able to meet  the helicopter’s pilot, paramedic and doctor and have a tour of the aircraft before it was called out to attend a seriously injured horse rider.

The visit was arranged by Peter Rodd, Assistant Grand Provincial Master from the Province of East Kent.

Presenting the cheque, Peter said: “We are delighted to be able to show our continued support of Kent, Surrey & Sussex Air Ambulance. Charitable giving is central to Freemasonry and a great many lives would be lost without the swift lifesaving help provided by the dedicated air ambulance doctors and paramedics.”

The cheque was donated through the Freemasons’ Grand Charity which supports the air ambulance and many other charities on an annual basis. The Grand Charity has donated more than £1.6million to Air Ambulance Trusts throughout England and Wales since 2007.

Jill Playle, Director of Communications for the Kent, Surrey & Sussex Air Ambulance, said: “We are very grateful for this cheque and the very generous support we receive from the Masons. I am delighted that they were able to visit the base and speak to the crew to find out just how their donations are used and the vital difference it makes to those people who need our services.”

Kent, Surrey & Sussex Air Ambulance is the only charity of its kind in the country to operate a 24-hour Helicopter Emergency Medical Service (HEMS). The crews respond to an average of 4-6 callouts during the day and 1-2 at night and the service is funded almost entirely by donations.

If you would like to find out more about the Air Ambulance or make a donation, please visit www.kssairambulance.org.uk