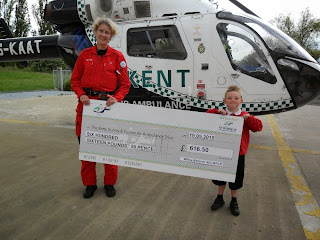 A Marden schoolboy has raised more than £600 for Kent, Surrey & Sussex Air Ambulance after completing a five-mile sponsored walk around the village.

Mikey Ballard, 7, decided to raise funds for the charity after seeing from his home how often the helicopter is called out form its Pattenden Lane base.

The Marden Primary School pupil was joined by his proud father Ricky as he completed “Mikey’s Big Walk” in 3hrs,20mins.

He doubled his target by raising a grand total of £616 for the air ambulance which relies almost entirely on donations.

He said: “I wanted to raise money for the air ambulance because I want them to have funds to help save lives and I can see from my home how many times a day it gets called out to serious accidents. I think it is a very good charity to do a sponsored walk for.”

Mikey’s walk around Marden – Home of the Kent Air Ambulance – took him through farmland, orchards and past an ancient boundary stone and woodland where charcoal was produced to dry the hops.

He set off from the library car park, through the recreation ground, along Goudhurst Road, and followed the so-called Festival route before heading back to the rec.

His father Ricky said: “It’s the first time Mikey has done anything like this and I think he could have done 10 miles because he wasn’t worn out at all. He got back and went and played football for three hours.”

“His mum and I are really proud of him for what he has done and at his age as well.”

On Tuesday, Mikey was treated to a tour of the air ambulance as he presented his cheque to one of the helicopter’s doctors, Leonieke Vlaanderen.

He was even allowed to sit in the back of the MD902 Explorer which flies at speeds of up to 150mph.

Dr Vlaanderen said: “I’m truly amazed by what Mikey has achieved. Every step he took will mean something for our patients. He has every reason to be proud.”