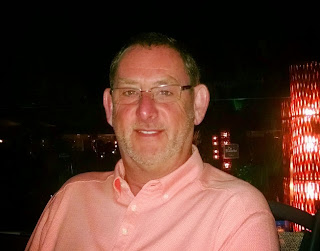 A businessman who survived a heart attack at work is to abseil the UK’s tallest sculpture next month to raise funds for the charity helicopter that helped save his life.

Bob Taylor, 57, was in his office at B&CE/The People’s Pension in Manor Royal, Crawley, when he suddenly collapsed.

His colleague Vicky Allen gave him CPR before paramedics and Kent, Surrey & Sussex Air Ambulance arrived and he was given emergency treatment by the helicopter’s doctor and critical care paramedic.

Bob has since made a full recovery and is now aiming to raise funds for his company’s Charity of the Year by abseiling the 376ft Arcelormittal Orbit at London’s Olympic Park.

He said: “In a moment of madness when watching The Apprentice last year, I made a throwaway remark to my wife about the treat that Lord Sugar had laid on for the team winning one of the tasks.

“The treat was a freefall abseil from the top of the Arcelormittal Orbit and I think I said something along the lines of, ‘I bet that would be fantastic’.

“However, I did not then expect to be opening my presents at Christmas and finding among them a picture of the sculpture with a date of June 27th underneath it. Oh dear, my wife had booked me an abseiling experience.”

His colleague and trained first aider Vicky Allen carried out CPR after seeing the advert which showed the ex-footballer performing chest compressions in time with the Bee Gees’ hit Stayin’ Alive.

Paramedics battled for half an hour to successfully resuscitate Bob before the Redhill-based air ambulance arrived to deliver post-resuscitation care.

The helicopter’s doctor, Magnus Nelson, and critical care paramedic David Wright anaesthetised Bob at the scene to protect his airway and control his breathing before flying him to a specialist coronary unit.

Bob spent four days at the Royal Sussex County Hospital’s intensive care unit before he was allowed home and was back at work in April that Year.

He has previously completed three charity bike rides for the British Heart Foundation and is now preparing for his abseil in aid of the air ambulance which relies almost entirely on donations and this year celebrates its 25th anniversary.

The ArcelorMittal Orbit is taller than Big Ben , the Statue of Liberty and more than double the height of Nelson’s Column, or the equivalent of 954 drinks cans stacked on top of each other.

B&CE/The People’s Pension Chief Executive Patrick Heath-Lay said: “We at B&CE are deeply indebted to the exceptionally professional individuals of the Kent, Surrey & Sussex Air Ambulance who helped to save Bob’s life. It is our honour to support the charity over the coming year.”

Bob can be sponsored at https://www.justgiving.com/BobTaylorAbseil/