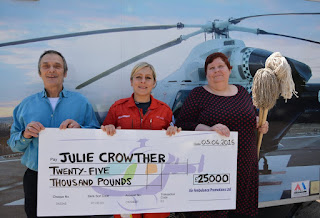 A cleaner from Gillingham is splashing out on a holiday of a lifetime to Australia after winning the £25,000 jackpot in Kent, Surrey & Sussex Air Ambulance’s lottery.

Julie Crowther, 57, joined the lifesaving charity’s Superdraw when a canvasser called at her home three years ago

She thought nothing more of her £8-a-month subscription until she received a call telling her she had won the top prize with lucky numbers 1, 7, 9 and 16.

The mother-of-four is now planning to spend her winnings on a trip to see her mother in Sydney for the first time in three years, and a new car for her husband Bob.

She said: “When I got the call to say I’d won, my first thought was it was a scam. I couldn’t believe it until I saw the cheque. It’s a fantastic prize for a local charity and more than enough to make me happy.”

“I picked the number 7 because it’s the date I met my husband, 9 is the date we got married and 1 and 16 is his birthday.

“I’ve never won anything before apart from the odd £10 on the National Lottery but we stopped doing that to support the air ambulance because saving lives is more important than anything else.

“I’ve got two sisters who are nurses and my husband used to work in a hospital so I come from a family of medical workers.”

Julie is the air ambulance’s first £25,000 winner this year as the charity celebrates the 25th anniversary of its launch at Rochester Airport.

She celebrated her windfall with a glass of bubbly as one of the helicopter’s paramedics presented her with her cheque at the helicopter base at Marden today (Friday).

The charity’s Regular Lottery costs just £1 per week and there are 12 winners drawn each week with prizes ranging from £25 to £1,000. Last week’s top prize winner was also from Medway - Doreen Capocci from Rochester.