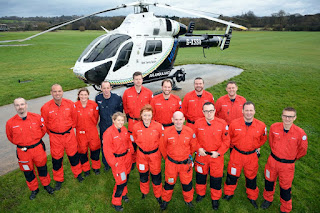 Members of the public will get the chance to meet the crew of the Kent, Surrey & Sussex Air Ambulance at an aviation festival in aid of the lifesaving charity this weekend (June 14th)

The Pilot’s Hub and Redhill Aerodrome are hosting a day of classic aviation including air display acts, aerobatic flights and helicopter pleasure flights.

Visitors will get an opportunity to have a tour of the aircraft based at the aerodrome including the Air Ambulance and National Police Air Service - subject to callouts.

There will also be a “lean to fly” exhibition with special offers on trial flying lessons and a motorbike rally with more than 250 Harley-Davidsons on display alongside vintage aircraft that will be flying in especially for the event.

All funds raised on the day will go to the Air Ambulance which relies almost entirely on public donations and is this year celebrating its 25th anniversary.

The Pilot’s Hub is a 1930s aviation-themed brasserie and coffee house which was featured on Sky TV’s Living Surrey.

Gates for the Aviation Festival at Redhill Aerodrome open at 10.30am and admission prices are £12 in advance or £14 on the day, £5 or £6 for children aged over five, and £32 or £36 for two adults and up to three children. To book tickets go to www.redhillavfest.co.uk.