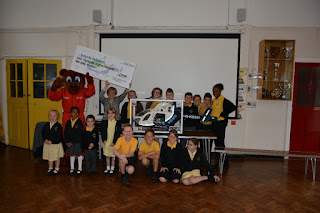 Pupils at Woodmansterne Primary School in Banstead have raised more than £1,700 for Kent, Surrey & Sussex Air Ambulance in memory of a fellow student.

The youngsters rallied their support for the charity helicopter after it was called to Kai Arnold, 11, and his mother Nicola Morris who sadly died in a road accident last year.

They held a number of fundraising events including a raffle, fruit kebab sale and bag-packing at supermarkets.

In total, they raised £1,709 for the Redhill-based air ambulance which relies almost entirely on donations - almost doubling their £1,000 target.

Woodmansterne CP School spokeswoman Sarita Grimster said: “I’m overwhelmed by the generosity and enthusiasm of all our pupils, the parents and the wider community.

“The house captains showed real dedication and commitment in their fundraising efforts to achieve something so positive in the face of such a tragedy.”

Woodmansterne was the first school to pilot a new air ambulance presentation to educate youngsters about the work of the Helicopter Emergency Medical Service (HEMS).

Primary and secondary pupils can learn about how the helicopter is called out, landing sites and how just £1 will buy a sheet of bubblewrap which is used to keep patients warm.

Air Ambulance Community Fundraising Officer Veronica Wiseman said: “We are enormously grateful to everyone at Woodmansterne School for raising such a substantial sum.”