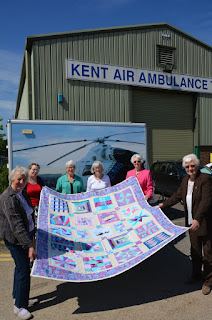 Photos: Sandra Pochin, in white, pictured with fellow Needleart members at the Air Ambulance base

A retired nurse from Wartling who almost lost her leg in a horse carriage riding accident has helped make a quilt to raise funds for the charity helicopter that flew her to hospital.

Sandra Pochin, 69, suffered a badly broken leg and six broken ribs when the horse suddenly bolted through a gate and she and the cart collided with a fence post.

She has since made a good recovery and helped sew a patchwork quilt to raise funds for Kent, Surrey & Sussex Air Ambulance which relies almost entirely on public donations.

Sandra said: “It’s our way of trying to help the air ambulance in the hope that they can make some money out of it.

“I couldn’t have been treated any better by them and I can’t praise them enough. I owe it to them that I’ve still got my leg.”

Sandra was training the horse for Carriage Driving for the Disabled when the accident happened in August, 2012.

The horse’s owner raised the alarm, the air ambulance was called and the helicopter landed in a nearby field.

She spent three weeks in hospital before she was allowed home and recently visited the helicopter base at Marden to present the quilt which took four months to complete.