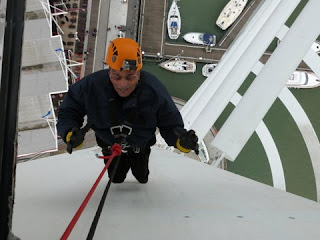 A Tonbridge pensioner who survived a horrific road accident has finally met the Kent, Surrey & Sussex Air Ambulance team more than 20 years after the helicopter helped save his life.

Les Garrett, 69, was driving a minibus to pick up pupils at Goudhurst Primary School when he was involved in a head-on collision with a lorry on Halloween in 1994.

He was airlifted to Maidstone Hospital with internal bleeding and severe spinal injuries after being trapped in the wreckage for almost two hours but has since made a good recovery.

Now, almost 21 years after his accident, he has raised more than £800 for the air ambulance by abseiling the 350ft Spinnaker Tower in Portsmouth.

He said: “It’s strange really because had I not had my accident in the first place I would never have done anything like this. It just shows you how positives can grow out of something negative in your life.”

Les is now planning to raise further funds for the air ambulance by taking on the charity’s Double 100 Cycle Challenge – a 100-mile or 100km ride which starts and finishes at the helicopter bases.

He is also aiming to complete a 1km swim at Tonbridge Swimming Pool despite losing his kneecap and fibula in his left arm in the accident.

Yesterday, (Tuesday), he and his wife Jan visited the Marden base to present his cheque to the pilot, doctor and paramedic and watched as the helicopter took off on an emergency call.

He added: “It was strange seeing the air ambulance, thinking I was strapped into it and it brings a tear to the eye.

“I thought I was dying when it was called to my accident, I thought they only came out to people who were dying.

“I was in and out of consciousness and I remember the pilot coming over to the paramedic and saying they had another call but they were staying with me. That confirmed to me that I was dying.”

Kent, Surrey & Sussex Air Ambulance has helped thousands of people and saved many lives after attending more than 25,000 call-outs over the last quarter of a century, and is currently celebrating its 25th anniversary.