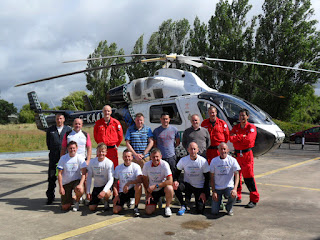 Photo: Members of the Hamstreet Ultimate Road Trip (HURT) team pictured at the Air Ambulance base at Marden.

A group of fundraisers from Hamstreet are preparing to embark on the challenge of a lifetime this weekend in a bid to raise £25,000 for Kent, Surrey & Sussex Air Ambulance.

The 14-strong team begin their epic journey on Saturday (July 4th) with a 1,344m hike up Ben Nevis - the highest mountain in Scotland.

They will then cycle to and swim across Loch Lomond before getting back on their bikes and riding to Cumbria where they will scale Scaffell Pike.

The next stage of their quest will see them get back on the saddle and cycle to Lake Windermere before swimming across it.

Finally, they will cycle to Wales where they will climb 1,085m Mount Snowdon before crossing Bala Lake and riding all the way back to Hamstreet a week later.

Team member Kevin Hughes, 43, took on the challenge despite a fear of water after his canoe capsized on Lake Windermere when he was a child.

He said: “Before I signed up to this I wasn’t able to swim the length of a swimming pool and I couldn’t even contemplate being in a lake. That was a massive fear for me. I’ve now swum in a lake four times but I still have a fear of being in the water.”

The Hamstreet Ultimate Road Trip (HURT) team are aiming to raise £25,000 for the air ambulance as the charity celebrates its 25th anniversary.

To help them with their training, they took part in the charity’s Double 100 Cycle Challenge last September which raised almost £38,000 for the charity.

And to boost their fundraising, they held a Pick Your Own Pumpkin event, pub quiz and golf day at London Beach Golf Club in Tenterden, and a ball at The Hythe Imperial Hotel.

The group have so far raised £18,814 and can be sponsored at www.hamstreet3peakchallenge.co.uk/ or  www.facebook.com/hamstreet3peaks