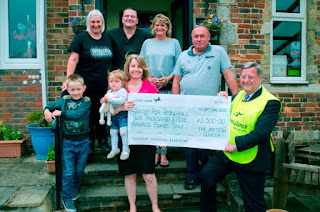 Staff and customers at The British Queen in Willingdon have raised more than £6,000 for Kent, Surrey & Sussex Air Ambulance.

The pub has been supporting the lifesaving charity since 2008, just a year after the Sussex helicopter was first launched.

This year alone, the annual charity day raised a massive £2,500 which is enough to fund a potentially lifesaving callout.

Landlady Angela Cain said: “When you think how much each callout costs, it’s quite incredible to have raised that amount in just one day. I’d like to thank the customers and staff because without them it would not have been possible.”

In total, the pub has so far raised £6,381 for the charity which receives no statutory Government or National Lottery funding and relies almost entirely on donations.

Air Ambulance Community Fundraising Officer Veronica Wiseman said: “We are enormously grateful to everyone at The British Queen for their continued support and for raising such a substantial sum over the years.”