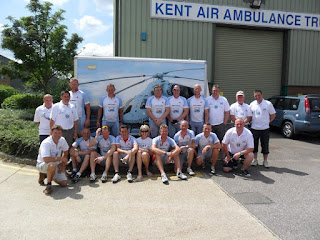 Photos: Members of the Hamstreet Ultimate Road Trip (HURT) team pictured at the Air Ambulance base at Marden on Saturday

A group of fundraisers from Hamstreet have successfully completed the challenge of a lifetime and raised almost £30,000  for Kent, Surrey & Sussex Air Ambulance.

They then cycled to and swam across Loch Lomond before getting back on their bikes and riding to Cumbria where they scaled Scaffell Pike.

The next stage of their quest saw them get back on the saddle and cycle to Lake Windermere before swimming across it.

Finally, they cycled to Wales where they climbed 1,085m Mount Snowdon before crossing Bala Lake and riding all the way back to Hamstreet on Saturday (July 11th), stopping off at the air ambulance bases at Redhill and Marden on the way.

Team member Mark Taylor said: “Several of the team couldn’t even swim a length before this but managed to swim a mile in open water which is unbelievable in itself.

“We started at Ben Nevis and the weather was absolutely hideous with 70mph winds and driving rain but mentally we were strong and we were on a bit of a high after day one.

“Like any challenge it wouldn’t have been a challenge if we didn’t have any problems and the weather was absolutely dreadful to start with.

“Injury-wise we have been so unlucky and we had three lads who were very doubtful they could continue after Lake Windermere but somehow they just gritted their teeth and got on with it in excruciating pain.”

The team were supported by a back-up vehicle and physiotherapist during their two-week adventure.

They held a number of fundraising events and have already beaten their target of raising £25,000 for the air ambulance in the year the charity celebrates its 25th anniversary.

Team Leader Spencer Goddard said: “We feel the air ambulance is such a worthwhile cause and to visit the base at Marden was really inspirational for us.

“It was called out while we were there and we committed ourselves to raising £25,000 to mark their Silver Jubilee and we’re now hoping to push towards £30,000.

“The whole event has been life-changing for everyone and it wouldn’t have been possible without the support of all our family and friends at home.”

The group have so far raised £29,186 can still be sponsored at www.hamstreet3peakchallenge.co.uk/ or  www.facebook.com/hamstreet3peaks