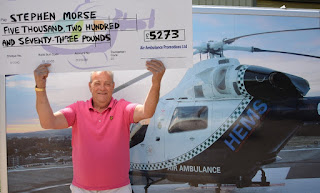 A lorry driver from Ashford is splashing out on a holiday to Egypt after winning more than £5,000 in Kent, Surrey & Sussex Air Ambulance’s lottery.

Steve Morse, 59, signed up for the lifesaving charity’s Superdraw through a canvasser at his local supermarket two years ago.

He thought nothing more of his £8-a-month subscription until he received a call telling him he had won the top prize with lucky numbers 1, 7, 15 and 22 in Wednesday’s draw.

The grandfather-of-six is now planning to spend his winnings on a two-week trip to Sharm el-Sheikh to celebrate his 60th birthday in October.

He said: “I’d just finished a night shift and was just about to go to bed when the air ambulance called but I couldn’t’ sleep after they told me I’d won. I’m not usually stuck for words but I was then, I was absolutely buzzing.

“I’m a road-user and you never know when you may need them. Two years ago, I was driving down the M20 on Christmas Eve when a tree came right down in front of me. An ambulance was called, I wasn’t seriously hurt but it caused £7,000 worth of damage to the lorry.

“It wasn’t until I sat down with my family and grandchildren on Christmas day that I realised how lucky I was.”

Steve celebrated his windfall with a glass of bubbly as he visited the helicopter base at Marden yesterday (Thursday) to collect his cheque, and kindly donated back some of his winnings.

He added: “I didn’t join the air ambulance lottery to win, I did it more to support the charity than anything else.

“I didn’t even know how much you could win but you’ve got to be in it to win it. I used to race greyhounds so I might buy another one and if I do I’ll call it Air Ambulance!”