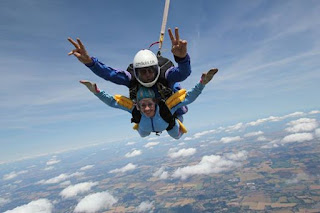 Photo: Natalie pictured during her skydive on Saturday

A former Kent, Surrey & Sussex Air Ambulance paramedic jumped out of an aeroplane in a sponsored skydive for the charity helicopter after it was called to her family three times.

Critical care paramedic Natalie Brodrick, 37, took the plunge with niece Izzy Sharpe who was airlifted earlier this year after she fell off her horse near Rye.

The accident happened less than a year after the helicopter was called to Natalie’s parents Tim and Diana who were involved in a road traffic collision.

And like Izzy, 18, mother-of-two Natalie was also airlifted after she too fell of her horse five years ago. All four have since made a full recovery.

On Saturday (July 18th), Natalie and Izzy took the plunge in a tandem skydive from 12,000ft at Headcorn Airfield, watched by family and friends.

Natalie, from Peasmarsh, said: “It was awesome, a fantastic experience, and I would definitely do it again.

“My partner’s an ex-paratrooper so he’s used to jumping out of an aeroplane which is something I’ve always wanted to do despite being scared of heights. I was waiting for the nerves to kick in but they didn’t, I was just so excited.

“The most frightening bit was being perched on the edge, ready to jump into the abyss. Izzy went first but I caught her up and we were able to wave to eachother in mid-air.

“I’m so glad I had it filmed because it was all over so quickly. We were in freefall for about 40 seconds.”

Natalie and Izzy decided to raise funds for the air ambulance after it was called to three generations of their family, in separate accidents.

Izzy was thrown off her horse at a riding school in Playden in March and was treated at the scene by the helicopter’s doctor and paramedic. They feared she may have broken her pelvis so flew her to the Royal Sussex County Hospital in Brighton.

In June last year, Natalie’s parents were driving back from a hospital appointment when their car was involved in a collision with an oncoming tractor and another vehicle at Peasmarsh.

They were treated at the road-side by the helicopter crew before being taken by land ambulance to the Conquest Hospital.

Natalie was airlifted after she fell off her horse in Camber in 2010 and in all three cases her former colleagues at the ambulance call centre were unaware of the connection to her.

Natalie and Izzy have so far raised £625 of their £1,000 target and can still be sponsored at https://www.justgiving.com/Natalie-Brodrick/