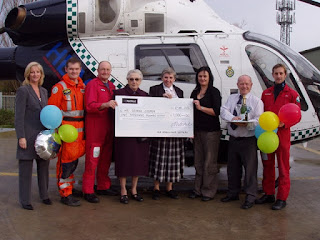 Photo: Joan and Elizabeth Cooper pictured (centre) at the Air Ambulance base at Marden in 2006 when George won the Regular Lottery

A pilot from Dover has won the £5,000 jackpot in Kent, Surrey & Sussex Air Ambulance’s lottery - almost 10 years after her father also won the top prize.

Administration clerk Elizabeth Cooper, 63, took on her late father George’s Superdraw numbers 10, 18, 23 and 31 when he passed away six years ago.

And she was stunned when the numbers picked from family birthdays came up in the midweek draw last month (August 19th), landing her a cool £5,408.

The windfall comes nine years after George won the £1,000 jackpot in the air ambulance’s Regular Lottery as the charity celebrated its then 10,000th active member back in 2006.

Elizabeth is now splashing out on a cruise with her mother Joan to Guernsey, Cherbourg and Le Havre.

She said: “It’s amazing because when you contribute to these things you never expect to win anything. You always expect it to be someone else. They say lightning never strikes twice but anything can happen.”

Miss Cooper has kindly donated back some of her winnings and will also be making a donation to the Ted Girdler Memorial Scholarship in memory of the pilot tragically killed at the Eastbourne airshow in 2000.

She holds a private pilots licence, flying Cessna 152s, and is also a social events organiser for the East Kent section of the Kent Institute of Advanced Motorists.

Her win comes after a terrible run of luck in which she broke her elbow in a fall at work and was also involved in a car accident.