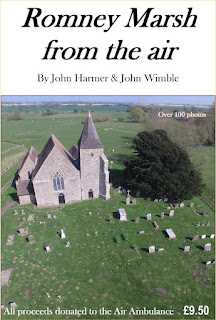 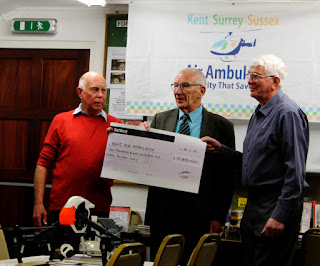 An unexpected donation from an anonymous donor whose husband was treated by the Kent, Surrey & Sussex Air Ambulance has agreed to sponsor additional copies of a book raising funds for the charity.

The authors of the book “Romney Marsh from the air”, John Wimble and John Harmer from New Romney, originally commissioned 1,000 books which quickly sold out donating all proceeds to the air ambulance. However when they presented the cheque to air ambulance volunteer Chris Longfield, and were asked about a reprint, a member of the audience was quick to show her support.

They said: “The air ambulance is a great cause and we wanted to offer our support. We hadn’t expected the first 1,000 books to sell so well but couldn’t afford a reprint, despite there being a demand. It was a coincidence that the lady in the audience was there that day and had experienced the wonderful work that the air ambulance does when they were called to her husband.”

The book of aerial photographs shows stunning views of Romney Marsh and has so far raised over £10,800 for the Kent, Surrey & Sussex Air Ambulance.

Veronica Wiseman, Community Fundraising Officer for the charity, said: “We are very grateful to the two Johns for their support and to the lady who donated funds for the reprint. The money raised by the book will make a significant difference to the air ambulance and our patients”.

The books are available from various shops on Romney Marsh or from the authors.