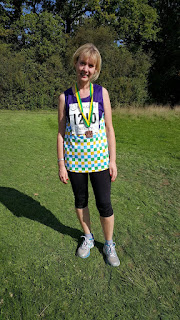 A Horsham woman is limbering up for her second half marathon in aid of Kent, Surrey & Sussex Air Ambulance after taking up running just five months ago.

Hazel Charman, 46, successfully completed the Barns Green 13-miler in 2hrs, 27mins, and is now preparing for the Gosport Half Marathon next month.

The IT project manager, who works for Royal Sun Alliance, started running only in June following a 12-week “Couch to Half Marathon” plan and her feet are now itching to get back out on the road.

She said: “Every year I try to do a charity challenge and last year I completed the 24-hour Three Peaks Challenge.

“This year, there were complementary places for the Barns Green Half Marathon being offered by one of the sponsors for the first seven people to respond so I thought I’d give it a go.

“I started off by signing up for the Horsham Parkrun as a warm-up, then the Arundel 10k  a month later to get a feel of what it was like to be in a race.”

Hazel’s father Mike is a volunteer for the air ambulance which has been supported by the Barns Green Half Marathon for a number of years.

She added: “Last year I helped out with marshalling at the event and I said to one of the marshals this year, ‘Be careful, you’ll want to run it next year!’.”

Hazel has so far raised £1,516 from the Barns Green Half Marathon and can still be sponsored for the Gosport run on November 15th at www.justgiving.com/Hazel-Charman2

The amount she raises will be match-funded by her employers and she is planning to carry on running by taking part in a half marathon when she visits friends in Holland next year.

Kent, Surrey & Sussex Air Ambulance is one of the official Charity Partners for next year’s Brighton Marathon and 10k. Anyone interested in running on behalf of the charity is urged to call 01622 833833.