Volunteer to the rescue 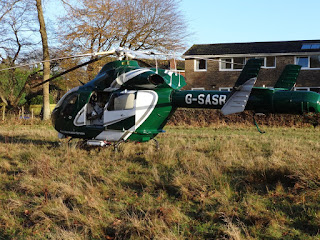 A volunteer for Kent, Surrey & Sussex Air Ambulance went above and beyond the call of duty when he gave the crew a lift to the scene of an accident after they landed near his home.

Phil Cornford sprung into action when he heard the helicopter landing in a field at the back of his home in Haywards Heath.

He spotted the doctor and paramedic coming through his neighbour’s back garden and kindly offered them a lift the scene of a road traffic collision nearby on Friday (December 4th).

He said: “I heard the helicopter flying overhead so I went outside out of curiosity and saw the crew coming through the side gate of my neighbour’s house.

“They couldn’t find an access out of the field so I offered them a lift to the scene which probably saved about five minutes.

“They noticed my air ambulance car sticker and that’s when I told them I was a volunteer for the charity. I just dropped them off and went back home.”

A pedestrian was treated at the roadside by the doctor and paramedic before being taken to the Royal Sussex County Hospital in a land ambulance, accompanied by the helicopter crew.

Phil has been an air ambulance volunteer for two years and normally helps at fundraising events and store collections. Other roles include placing and collecting collection boxes, cheque presentations, couriers, office administration and giving talks about the lifesaving work of the charity.

Members of the public occasionally give the doctor and paramedic a lift to the scene of an incident when they are unable to land next to the patient.

Kent, Surrey & Sussex Air Ambulance is one of the official Charity Partners for the 2106 Brighton Marathon and 10k. Anyone interested in running on behalf of the charity is urged to call 01622 833833.