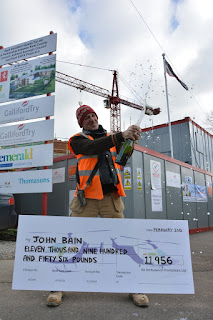 A workman from Dover has won almost £12,000 just six months after signing up to Kent, Surrey & Sussex Air Ambulance’s lottery.

He thought nothing more of his £8-a-month subscription until he received a call telling him he had won the top prize in last week’s draw, with random lucky numbers 3, 16, 20 and 32.

The father-of-five is now planning to spend his winnings on a Triumph Bonneville motorbike and a brand new electric guitar.

He said: “I don’t usually sign up to charity Direct Debits but I really do think the air ambulance is a worthy cause.

“The lady who came round explained very well that it was a charity-funded operation and I just thought I wouldn’t miss the money regardless of my financial situation. It’s small change to support a good cause.

“It was a complete surprise when I heard I’d won, and such a substantial sum as well.”