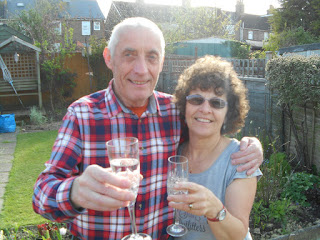 A retired golf course greenkeeper from Hailsham who is battling cancer has won more than £18,000 in Kent, Surrey & Sussex Air Ambulance's lottery.

Father-of-two Robin Smith, 69, who worked at Limpsfield Chart Golf Club in Surrey for 40 years, signed up to the life-saving charity's Regular Lottery and Superdraw when a canvasser called at his home three years ago.

He thought nothing more of his £8-a-month subscription until he received a call from Lottery Manager James Cook telling him he had won the top prize in Wednesday's Superdraw.

Robin won a grand total of £18,270 with lucky numbers 2, 10, 21 and 30 and is now planning to spend his winnings on a new conservatory at his Old Orchard Place home.

He said: "When James called to say I'd won, I laughed and it was quite difficult to take in. Even when he said it wasn't a joke I went on to the air ambulance website to check the lottery results.

"My wife and I were thinking of a 101 things we could spend the money on but I still didn't believe I'd won until the cheque arrived the next day.

"I'm in the middle of cancer treatment so this is a real boost. I've had a big operation on my liver and I'm waiting for another one on my bowel next month.

"I've been given an eight-week recovery period so the way I look at it is that I've got eight weeks to think about how I can spend the money.

"My bowel cancer was picked up by a free screening so I would urge everyone to take up this offer. It's something men can be very blasé about but it can save your life."

Kent, Surrey & Sussex Air Ambulance's Regular Lottery costs just £1 per week and there are 12 winners drawn each week with prizes ranging from £25 to £1,000.