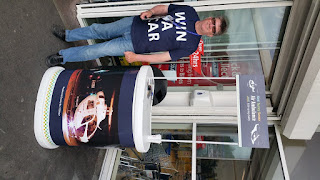 Staff and volunteers for the Marden-based charity sold tickets for the prize draw at the Courteney Road store last week (July 6th, 7th and 8th).

A grand total of £1,436.93 was raised in ticket sales and donations for the Win a Mini raffle in aid of the air ambulance which relies almost entirely on public support.

The charity is very grateful to Barretts of Canterbury, a Kent-based family-run business famous for its motor dealerships in Canterbury and Ashford who are supporting the year-long campaign.

Tickets for the raffle cost £5 each and can be purchased online at www.raffle.me.uk and the draw will take place on March 31st, 2017, making it a perfect present for the summer months.

Kent Air Ambulance was launched at Rochester Airport in December, 1989, and has attended more than 25,000 callouts since then.

Head of Lotteries & Gaming James Cook said: "We are really grateful to Tesco Gillingham for allowing us to promote the Win a Mini raffle at their store, and to the public for their support."