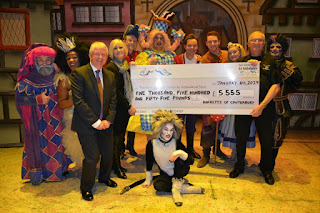 Photo: Paul Barrett and air ambulance volunteer Paul Butt pictured with the cast of Dick Whittington at the Marlowe Theatre.

Barretts of Canterbury has raised more than £5,000 for the Kent, Surrey & Sussex Air Ambulance through this season's pantomime production of Dick Whittington.

Managing Director, Paul Barrett, was joined on stage at the Marlowe Theatre today (Friday) by all the cast ahead of their matinee performance as they presented a cheque to one of the charity's volunteers, Paul Butt.

They presented a cheque for £5,555 to the charity, after Barretts of Canterbury hired the theatre for a special performance for employees, and their families and friends, and donated the proceeds.

The annual fundraising event has so far raised a grand total of £18,855 for the charity in just four years, which is enough to fund seven potentially life-saving missions. Funds were also raised for Porchlight and Pilgrims Hospices.

Paul, who is a Trustee of the Kent, Surrey & Sussex Air Ambulance, said: "It was a great evening out for us all and we are delighted to be able to support these fabulous local charities, who are doing such good work in our communities."

Lynne Harris, Director of Income Generation for the charity, said: "We are really grateful for the support of Barretts of Canterbury for such a generous donation and the amazing support they have given us over the last four years. The money they have raised will make such difference to those who need us."

Barretts of Canterbury has also supported the Kent, Surrey & Sussex Air Ambulance for the last two years for their 'Win a MINI' raffle campaigns.

The Kent, Surrey & Sussex Air Ambulance relies almost entirely on voluntary donations and fundraising in order to deliver enhanced pre-hospital care to the most critically ill and injured patients in the region 24 hours a day, 365 days a year.