Airlifted cyclist on 24 Hours in A&E 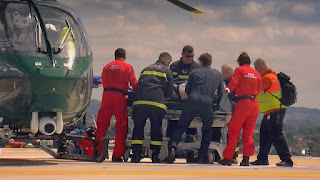 A cyclist airlifted to hospital after a crash in the London to Brighton Bike Ride is to be featured in TV medical documentary 24 Hours in A&E  tomorrow (Tuesday).

Niki, 34, was taking part in the annual charity event last year when he collided with another cyclist at South Nutfield.

He suffered head and arm injuries and had to be given emergency treatment at the road-side by Kent, Surrey & Sussex Air Ambulance's doctor and paramedic.

He was flown by the Redhill-based helicopter to the specialist neurological unit at St George's Hospital in London, in just 12 minutes.

His friend Chris was ahead of him in the race when he was found unconscious and unresponsive by race volunteers.

Chris said: "I heard about the accident when I got to one of the stopping points. I was thinking this has to be one of the worst things that could possibly ever happen. He was unconscious and he'd been airlifted to hospital."

24 Hours in A&E shows Niki arriving on the rooftop helipad at St George's where consultant Paul prepared his team and talked about his fears for Niki.

He said: "If you hear that a HEMS (Helicopter Emergency Medical Service) call is coming in, you know that this is going to be one of the most sick patients you are going to see."

As doctors assessed Niki's injuries, it became obvious that his memory had been affected by the impact as he struggled to recall details of the crash.

Paul added: "If patients have lost part of their memory, that suggests that their brain has taken a big impact and that immediately alerts you."

Staff at St George's were still trying to contact Niki's wife Phill 300 miles away in the North East as he underwent CT scans.

When she finally arrived at the hospital, Phill spoke about how she and Niki bonded over a mutual love of Monty Python after a night out in Redcar. She moved there to live with her grandmother after losing her parents at a young age.

She said: "He was just really east to get on with, we sat and talked about nerd stuff all night. If anything had have happened differently, I wouldn't have met Niki. I wouldn't change anything because I'd rather have him than what I could have had."

24 Hours in A&E is on tomorrow (Tuesday) at 9pm and if you would like to find out more about the air ambulance or make a donation, go to www.kssairambulance.org.uk