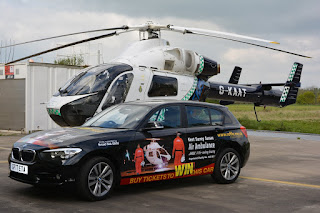 Staff and volunteers for the life-saving charity sold tickets for the Win a BMW draw at Market Place Shopping Centre last week (3rd – 5th May).

A grand total of £1,604.11 was raised in ticket sales and donations for the charity, which relies almost entirely on public support to continue its vital service.

A woman whose husband was airlifted after a gliding accident at Storrington was among the supporters who bought a ticket. He has since made a full recovery.

Tickets for the car raffle cost £5 each and can be purchased online at www.raffle.me.uk with the draw taking place on November 2nd.

This year, there will also be a second and third prize of £1,000 and a helicopter pleasure flight from Redhill Aerodrome where one of the charity's aircraft is based.

James Cook, Head of Lotteries & Gaming, said: "Our car raffle is a brilliant way to support our vital work, whilst giving people the opportunity to win a brand new BMW this November. We are so grateful to Market Place Shopping Centre, and to the general public, for supporting us so well in the community."